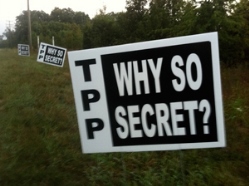 The head of the largest U.S. labor confederation says there is no reason to further delay releasing the text of the 12-nation trade deal known as the Trans-Pacific Partnership (TPP).

AFL-CIO President Richard Trumka wrote a letter to President Obama arguing that the American public has the right to see the final text of TPP for themselves.

“In my experience, when there is such good news to share, there is no need for secrecy,” said Trumka. “If TPP will do for the American middle class all that [the U.S. Trade Representative] claims, releasing the text would be the single best way to prove that.”

The IAM and the labor movement have been closely watching TPP negotiations, which wrapped up earlier this month. If approved by Congress, the TPP will vastly expand the trade policy that has previously failed millions of American workers and closed thousands of factories across the country. IAM International President Tom Buffenbarger has called the TPP “a new low in corporate dominance.”

The U.S. Trade Representative has said the text of the TPP should be publicly available in about 30 days. Trumka balked at that timeline.