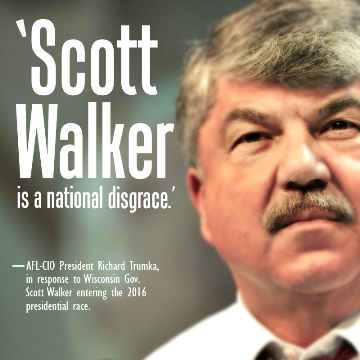 Scott Walker is a national disgrace.

That was the statement released by AFL-CIO President Richard Trumka in response to the Republican Wisconsin governor’s announcement on Monday that he is running for president.

The right-to-work (for less) legislation Walker signed earlier this year blatantly benefits big business at the expense of the state’s hard working citizens. His attacks in 2011 on the collective bargaining rights of the state’s public employees introduced Walker to the majority of Americans. He later embarrassed himself and insulted everyday citizens when he compared peaceful labor protestors to the ISIS threat.

As the 15th declared Republican candidate, Walker stands out as one of the most regressive and polarizing politicians in the 2016 race.

“Organized labor is the final frontier when it comes to defending the rights of workers,” said IAM Midwest Territory General Vice President Phil Gruber at a rally earlier this year opposing Walker’s plans. “Their ultimate goal is to eliminate your voice.”

SIGN THE PETITION: Don’t Let Scott Walker Do to America What He’s Done to Wisconsin.