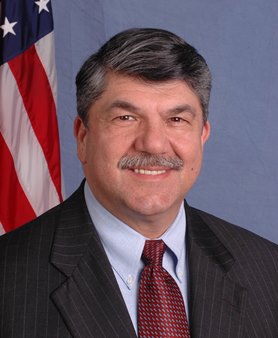 The biggest Wall Street banks don’t want you to know how much they pay their top executives to take government jobs, and they’re pleading with the Securities and Exchange Commission to let them keep it a secret.

In an op-ed to The Wall Street Journal, AFL-CIO President Richard Trumka helped sound the alarm on the “new and outrageous wrinkle” of Wall Street banks giving golden parachutes – generous severance packages normally aimed at executives who are terminated after a merger or takeover – to executives who voluntarily resign to enter government service.

“Government-service golden parachutes raise troubling questions,” wrote Trumka. “How do Wall Street banks benefit from giving their executives a financial incentive to enter government service? Do they expect to receive favorable government treatment from their former executives? And if not, why should bank shareholders be asked to bear the cost of such golden parachutes?”

An AFL-CIO shareholder proposal is urging companies to disclose which senior executives are eligible for golden parachutes, and how much they would receive if they took a government job. Citigroup, Goldman Sachs and Morgan Stanley have already asked the SEC to block shareholders from voting on the proposal.

“Independence and impartiality in government service matters – especially when it comes to bank regulation after the recent Wall Street financial crisis,” wrote Trumka.

The federal law prohibiting government employees from receiving a private sector salary doesn’t apply until they are sworn into office, “but Congress should take a close look at why these government-service golden parachutes can skirt the spirit of the law, why they are proliferating, and what it means for our democracy,” wrote Trumka.

“In the shorter term, if financial institutions think this is truly beneficial to shareholders, they should have no problem with more disclosure and transparency,” continued Trumka.