Tune in to the IAM’s Pre-Debate Facebook Live Chat 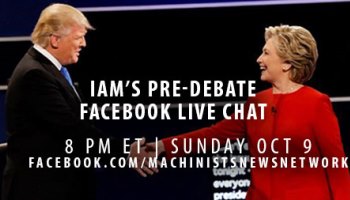 What are IAM members thinking about the presidential election? From the economy and Social Security to trade and health care, there’s a lot to consider before polls close on November 8.

We’ll sit down with Machinists Union members—and take your questions live on Facebook—at 8 p.m. ET on Sunday, October 9, an hour before Hillary Clinton and Donald Trump take the stage for the second presidential debate.

On Sunday, go to Facebook.com/MachinistsNewsNetwork to watch and join the conversation.

The talk, hosted by the Ohio State Council of Machinists, will be broadcast live from the IAM District 54 union hall in Columbus, OH. Current polling shows the candidates in a near tie in the Buckeye State, historically a bellwether for who will win the election as a whole.

Go to Facebook.com/MachinistsNewsNetwork at 8 p.m. ET on Sunday, October 9 to watch IAM members talk about the issues that matter most to them in the 2016 election.