Tune in to the ‘Brotherhood Outdoors’ Labor Day Marathon

The Union Sportsmen’s Alliance (USA) and the Sportsman Channel are teaming up to honor the American worker and showcase great products made in America. The Brotherhood Outdoors Labor Day Marathon airs Monday, September 7 from 5 to 8 p.m. ET.

Click here to find the Sportsman Channel in your area. 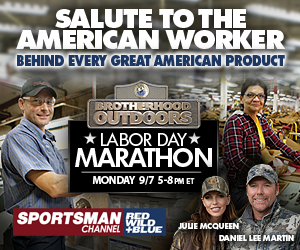 The marathon includes an episode with IAM Local 2781 member Gene Barnes and his father, Harlyn, as they hunt elk in Idaho. The trip honored the memory of Gene’s brother, and Harlyn’s son, Greg, who died as a result of a workplace explosion.

Read about Barnes family and their hunt.

“Labor Day was, and is, a day set aside to honor all the hardworking Americans who help build this great country,” said USA CEO and Executive Director Fred Myers. “We are excited to once again partner with Sportsman Channel to salute American workers and some of the tried and true products they are still making here in the U.S.”

Six back-to-back episodes of Brotherhood Outdoors will give viewers an intimate look into the lives of hardworking, blue-collar Americans, as co-hosts Daniel Lee Martin and Julie McQueen join them on North American hunting and fishing trips.

Between episodes, Martin and McQueen will salute some of America’s most historic and iconic outdoor products and the workers who make them.  Outdoorsmen and women around the world have come to know and trust these quality products.

“The Brotherhood Outdoors marathon on Sportsman Channel will hammer home the connection of hard-working American union workers and their passion for the outdoors,” said Sportsman Channel spokesman Mitch Petrie. “Brotherhood Outdoors also shines a light on family life and the traditions of hunting and fishing in the United States that play a part in young people’s lives.”