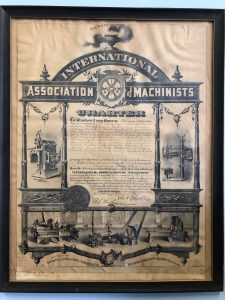 West Valley, NY Local 2401 celebrated its 50th anniversary on August 17th with a picnic recognizing the milestone. Its members are employed at the West Valley Demonstration Project in West Valley, NY. These members work in a dangerous environment decontaminating, and decommissioning a former nuclear fuels reprocessing center.

“I congratulate both of these Local Lodges as they mark these important milestones,” said IAM Eastern Territory General Vice President Jimmy Conigliaro Sr. “Locals 1363 and 2401 are continuing the Machinists tradition of justice on the job and service to the community, and I send them thanks on behalf of the IAM.”

“This local has long, and storied past representing a diverse group of workers,” said Local 1363 President Kenny Howard. “We’ll kick off the next 100 years the same way by continuing to fight for working families across Ohio.”