U.S. Senators Call on Boeing to Negotiate in South Carolina 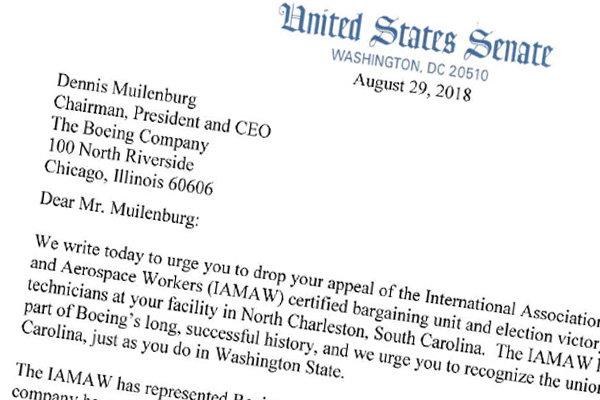 Twenty-three U.S. Senators, led by Sen. Sherrod Brown (Ohio), sent a letter urging the Boeing Co. to respect the decision of Flight Line Technicians in South Carolina who voted on May 31, 2018 to join the Machinists Union (IAM).

South Carolina @Boeing workers who voted to join the Machinists Union have the support of @SenSherrodBrown and 22 other U.S. Senators. Today they called on @BoeingCEO Dennis Muilenburg to respect these workers' voice and negotiate a contract.

Boeing has refused to bargain with 180 workers at its North Charleston, S.C. manufacturing facility who chose by a 2-1 margin to join the IAM.

“I want to thank each of these Senators for standing up for the rights of working people,” said IAM International President Bob Martinez. “We hope this effort will encourage Boeing to finally negotiate with its South Carolina Flight Line and agree on a contract that will make the company and the entire aerospace industry stronger.”