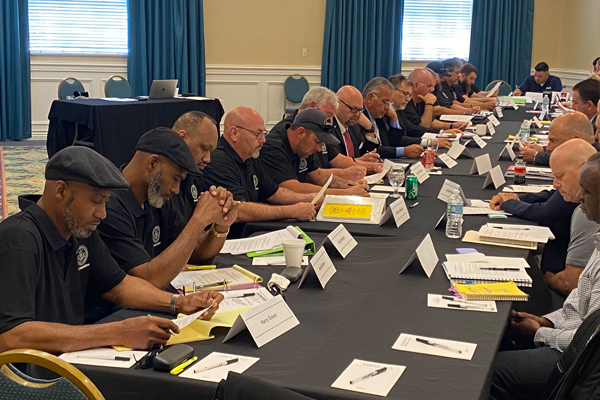 WASHINGTON, D.C., May 1, 2022 – Nearly 700 members of the International Association of Machinists and Aerospace Workers (IAM) working at three separate United Launch Alliance (ULA) sites overwhelmingly voted yes to a new three-year contract. The contract covers Machinists Union members from IAM Local 610 in Cape Canaveral, FL, Local 44 in Decatur, AL, and Local 2786 at Vandenberg Space Force Base in California, who build rockets such as the Atlas V, work on launch teams and maintain facilities across the United States.

“ULA Machinists are the hardworking men and women who ensure that America’s launch capability remains second to none by not only manufacturing but launching some of the best and safest rockets in the world,” said IAM International President Robert Martinez Jr. “They deserve a contract that acknowledges the decades of skills and expertise they bring to the job. I am proud to say that’s what we were able to bring home to the membership by standing in solidarity and being prepared for the bargaining table.”

“This negotiating team started preparing for these negotiations more than a year ago with the full might of the Machinist Union supporting them,“ said IAM Southern Territory General Vice President Rickey Wallace. “From the Strategic Resources and Communications departments to Director Chris Wagoner from the William W. Winpisinger Education Center who led the bargaining preparation class, the mission was clear – to bring home a strong IAM contract, and that’s what they did. This is the power of solidarity.”

“I am proud of this negotiating team who honorably represented our shop floor members at the bargaining table,” said IAM Aerospace General Vice President Mark Blondin. “These workers are the best of the best, helping ULA maintain a 100% mission success rate for launches. They deserve a contract that compensates them for all they have given to this country. In this agreement, we achieved gains such as stronger wages, benefits, and working conditions, but we were also able to safeguard the future. Increases to the 401(k), which sets a path for future generations to thrive, seniority protections, and securing fair and equitable work rules are some hard-fought achievements we reinforced and preserved.”

In 2018 during the last negotiations, a much different scene played out at the bargaining table when the IAM and ULA came to an impasse, and the workers at all locations went on strike for close to two weeks. But lessons learned in the past cemented the goals of IAM members in the present. With one voice, all involved understood what was imperative to the membership; to safely build and launch some of the best rockets in the world, ensuring that ULA and the work of the Machinists Union continues to set the standard in the aerospace industry.

“Our members work hard to launch some of the most expensive technology into space, and their work serves to better our society,” said IAM Western Territory General Vice President Gary R. Allen. “They deserve a great contract for the recognition of their work.”

For more on negotiations or to view all contract changes, log onto IAM/ULA Negotiations.