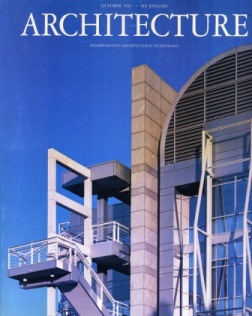 Current and former IAM members and representatives gathered recently to mark the 20th anniversary of the IAM’s headquarters building in Upper Marlboro, MD.  See video of the event from the Machinist News Network here.

“Twenty years ago, our union relocated its headquarters from 1300 Connecticut Avenue in Washington, D.C. to 9000 Machinists Place in Upper Marlboro, Maryland,” said IAM President Tom Buffenbarger during remarks at a special anniversary celebration. “This is a special place. It’s our home.”

Both the original architects and contractors were on hand for the anniversary event.

“What makes a special project and special architecture is a great client,” said architect Joe Boggs. “You cannot do great, inspired work without a client that gives you trust. When someone sees this building, they say, ‘Whoever works here cares about precision, quality and how to put things together that are complex.’  That’s what the building says on the outside to me.”

“This building is the first and only building that we have ever built that made the cover of a magazine,” said contractor Jim Davis, holding up the October 1993 cover of Architecture magazine. “Your building is artwork. And we are so proud.”