What are Union Members Thinking About the Election? We Went to Ohio to Ask 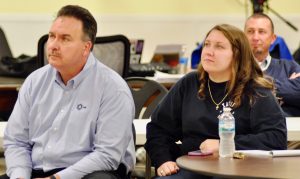 The Ohio State Council of Machinists hosted a watch party for Sunday’s presidential debate, and the Machinists News Network was on hand to interview IAM members and working people. Dozens gathered at the District 54 union hall in Columbus to take in the second meeting of Hillary Clinton and Donald Trump.

From health care and wages to workers’ rights and Social Security, voters have a lot on their minds before the polls close on November 8. Ohio, a battleground state, is being watched especially closely.

Here’s what some Ohio union voters had to say:

“We know [Trump] is pro-right to work, which would be just catastrophic for collective bargaining. That’s what protects benefits, helps protect workers in this country and helps maintain the middle class.”

“There’s 30 days left to get this election right for America. I believe we’re at a watershed moment right now where we have an opportunity. If you look at all the issues that have been discussed on the Republican side, the Democratic side all year long—these are our issues. The issues that we wanted to put front and center for decades now as it relates to trade, as it relates to raising wages for America, working rights, organizing—these are all right there now for the taking.

“One candidate in our opinion, Hillary Clinton, has the best plan by far to move America forward on those issues.”

“Trump clearly demonstrated that he’s not truly remorseful for any of his attacks regarding race, ethnicity, personal beliefs and most recently women. He also gave proof to the union members watching here tonight his willingness to not only use the power of the presidency for his own gain, but to attack and punish anyone who opposes him.”

“Hillary Clinton—she’s got plans to invest in infrastructure, invest in jobs. She has plans, Donald Trump doesn’t have any plans.”

“If you take away the names and look at the records, there’s only one candidate out there that has been with working people and with union members every step of the way. That candidate is Hillary Clinton.”

“As a father of my daughter, I want her to have equal pay and everything that I’ve had as a man. As far as my wife, the way [Trump] talked about a married woman, it’s terrible. I hope people see it and realize it, and they vote for Hillary.”