Up Close and Personal: Richard Trumka 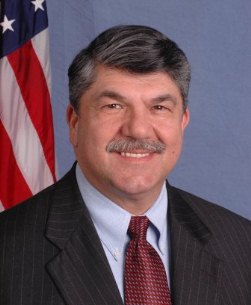 Every Sunday, the Washington Post magazine profiles a prominent area resident who describes the path that led them to their life’s work. In the latest issue, AFL-CIO President Rich Trumka recalls the events that took him from a small West Virginia coal town, to law school in Pittsburgh and eventually to the top job at the AFL-CIO.

“I was about 12 years old at the time, and the miners were on strike, and I was with my maternal grandfather. We were having a conversation, and I asked him, “What can I do to help workers.” He said: “Look around you. Who’s the people who can influence people the most?” And I said, “Politicians.” And he almost backhanded me, because he was real “fond” of politicians. And I said, “Lawyers.” And he said, “That’s right. If you want to help miners, get yourself a law degree and help miners. Stand up for them.” And that sort of set me on the course.”

Trumka goes on to describe the strange allure of working in the mines, despite its many dangers. “Once you work underground, the camaraderie, the closeness, it’s the way America should be right now, where everybody watches everybody else’s back,” said Trumka. “I mean, your worst enemy above ground when you were underground would watch your back, and you’d watch his or hers, because everyone’s life depended on everybody else.”