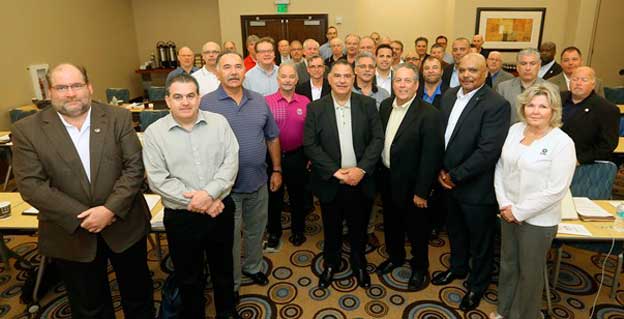 IAM Automotive Coordinator Boysen Anderson, second from right, led a team of more than 30 IAM representatives at negotiations with UPS and UPS Freight.

More than 4,000 IAM-represented mechanics at United Parcel Service (UPS) and UPS Freight have ratified new contracts that cover over 100 locations nationwide. The two IAM-UPS national agreements, one for UPS and the other for UPS Freight, are both five-year contracts.

Both deals increase employer pension contributions, up yearly tool allowances to $300, include strict language on subcontracting work and improve military leave. UPS employees will see a $3.20 general wage increase over the first four years of the contract. UPS Freight employees will earn $0.50 wage hikes for each of the first four years. Fifth-year wage rates for both contracts will be negotiated at a later date.

“Our negotiating team was well prepared to represent the interests of our UPS and UPS Freight members,” said IAM Automotive Coordinator and Lead Negotiator Boysen Anderson. “The result was a contract with measurable wage and benefit improvements, along with the security that any IAM contract brings to our members and their families.”

The IAM represents more than 40,000 members in the automotive and trucking industries.