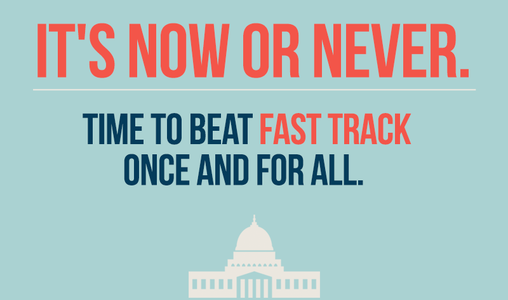 As we’ve said before, this Fast Track fight is far from over. House leadership is using legislative gimmickry to again bring Fast Track for the job-killing Trans-Pacific Partnership (TPP) to a vote TODAY, Thursday, June 18.

The time to defeat Fast Track is NOW: Call your member of Congress at 855-712-8441 and let him or her know that we’re still engaged, and to vote NO on Fast Track.

The White House and GOP leadership are trying to railroad Fast Track through Congress without any assurance that the Trade Adjustment Assistance (TAA) program will be renewed— even though the fundamentally flawed and poorly funded version of TAA was recently defeated by an overwhelming majority in the House.

While the fast track approval process, euphemistically called Trade Promotion Authority (TPA), is being sought to force the nearly complete, yet still secret TPP, through Congress, it will also apply to any free trade agreement finalized in the next six years. Given the consequences of such legislation, it is unconscionable that Fast Track is not be subject to an open rule that would allow amendments.

This is a woefully undemocratic way to consider any type of legislation, especially when it holds our jobs in the balance. Call your member of Congress at 855-712-8441 and urge them to vote NO on Fast Track.