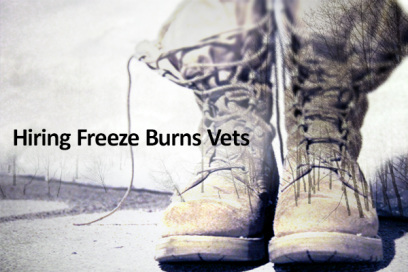 The haphazard federal hiring freeze is not only deteriorating the government’s efficiency, but it’s especially ominous for America’s veterans, who are among the group’s most harmed by the policy.

Former service members make up 32.5 percent—nearly one-third—of all newly hired veterans. In the Department of Defense, approximately 31 percent of its 690,000 employees are veterans.

“Positions that would normally be filled by veterans—doctors and nurses at veteran’s hospitals; welders, mechanics, electricians at Army depots and Naval centers across the country—will go unfilled,” said IAM Government Employees Director Jim Price. “This freeze will impact not only our retiring veterans, but could also affect our military readiness and our active military men and women in the performance of their duties.”

The freeze won’t just affect veterans in Washington, DC. More than 85 percent of the federal workforce is outside the DC area.

“It is clear that the freeze prohibits subcontracting,” said Price. “However, agencies may seek variances from this order to subcontract as the only way to achieve their mission, which would eliminate these jobs completely. This ill-advised policy should be reversed as soon as possible.”

The IAM and its sister union, the National Federation of Federal Employees, NFFE-IAM, represent more than 100,000 federal workers at agencies across the United States.