Video: A Conversation on Activism with APRI President Clayola Brown 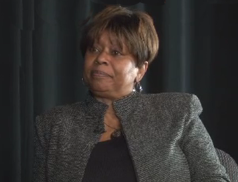 Lifelong labor activist Clayola Brown, president of the A. Philip Randolph Institute, sat down with the Machinists News Network to share her thoughts on race, voting rights and the future of activism on the 50th anniversary of the Selma-to-Montgomery marches.

“When you look at the voter disenfranchisement around the country,” said Brown, “you want to cry because folks say we’ve been there, we’ve done that we don’t have to worry about that anymore.”

Brown traces her organizing roots back to the old Manhattan Shirt Factory in Charleston, SC, where both she and her mother were activists in an organizing campaign.

“What happened was learning about the principles of work,” said Brown, “and why being in a plant that had a union in it was so vitally important.”

“There is hope. The hope is that we continue to fight,” said Brown. “To make sure that every time someone is disenfranchised we lift our voices and say, ‘not on my watch.’ We can win if we continue to fight. The struggle is what has kept us alive all these years and to do it in unity is the best way to fight.”