The Negotiating Committee for IAM Local 10 participated in the Negotiation Preparation for Bargaining Committees program at the William W. Winpisinger Center. in Hollywood, MD. The Local represents employees at Aleris Rolled Products, in Richmond, VA. 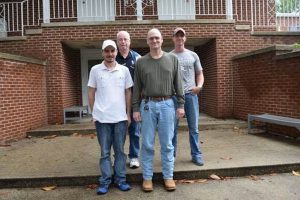 The current contract with Aleris Rolled Products expires August 1, 2017. Recognizing that this promises to be a difficult round of negotiations, the Committee strategized to change bargaining history, map a new direction for relations with the company, put better language in the contract, and to build solidarity in the bargaining unit.

“The week at the Winpisinger Center – though it was a bit like drinking from a fire hose – gave us the opportunity to assemble and develop a detailed plan to secure the best contract possible,” said Directing Business Representative Russell Wade. “The Committee worked hard, and they leave the Center better prepared to advance the needs of the Local Lodge Union members.”