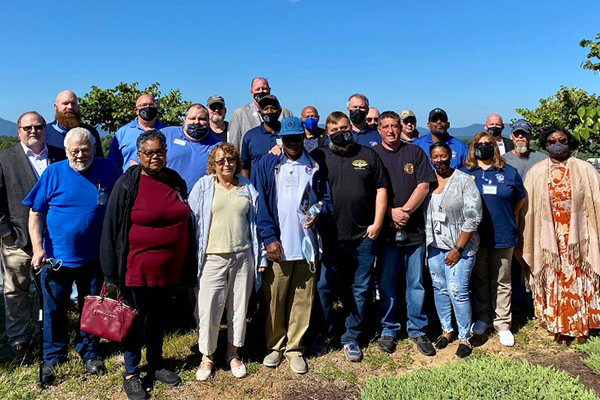 Delegates from across Virginia gathered in Roanoke recently for the Virginia State Council of Machinists fall meeting. Discussions at the biannual meeting focused on the importance of the upcoming elections and the Machinists Union’s vital role in getting the vote out.

“The council did a great job addressing a variety of labor issues, including presentations outlining how high member participation in the upcoming elections could shape the future of the labor movement in the state,” said IAM Southern Territory Vice President Rickey Wallace. “This election will have a lasting effect on working people in Virginia, and we must support Gubernatorial Candidate McAuliffe, who champions the same principles the IAM fights for every day.”

Members attending the Virginia State Council meeting heard how the Machinists Non-Partisan Political League (MNPL) helps strengthen our union and state councils. The voluntary donations to the MNPL help us get pro-worker candidates up and down the ballot elected in hopes of implementing a pro-worker, pro-democracy agenda in the state. Increasing contributions to the MNPL will be a big push for the Virginia State Council now and in the upcoming future.

“This year’s Virginia State Council meeting allowed us to educate members about some of the pressing issues we have in our state,” said Virginia State Council of Machinists President Larry Battle. “During the council meeting, we spent a good majority of time explaining “Campaign in a Box,” our get out the vote program to mobilize our members for the 2021 November elections. We stressed the importance of working to elect candidates who will fight on behalf of working Virginians. The Virginia State Council of Machinists is working to implement a pro-worker platform that focuses on workers’ rights issues, increasing jobs training opportunities, and fighting to eliminate so-called right-to-work laws in our state.”

The Virginia Machinist Council, founded in 1942, is the political and education arm of the IAMAW in the Commonwealth of Virginia. The Council works on behalf of all working families through involvement in our members’ political process and education.