Voting Rights Act Turns 50, Now We Have to Defend It 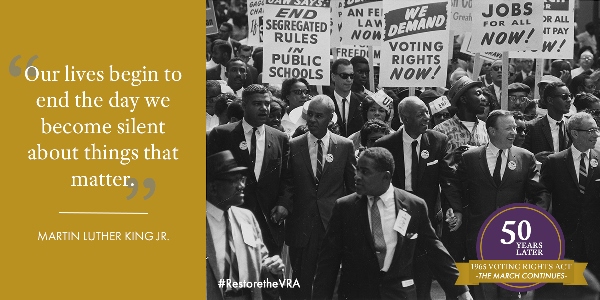 With the 50th anniversary of the Voting Rights Act (VRA) this week, today should be a time to celebrate an important milestone. Instead, it appears that we are reversing course on guaranteeing voting rights for all.

On Aug. 6, 1965, President Lyndon Johnson signed the VRA into law, following the clash between civil rights marchers and police in Selma, Alabama. The VRA provided vital enforcement for the post-Civil War 15th Amendment of the Constitution, which prohibited restricting voting rights based upon “race, color or previous condition of servitude.”

Prior to the VRA in much of the deep-south, black voter turnout and registration was suppressed by intimidation and white-favored eligibility tests. After the VRA was implemented, voter turnout among disenfranchised African Americans in Mississippi alone increased from 6 percent in 1964 to 59 percent by 1969.

Beginning with the 2013 Supreme Court decision to undo part of the VRA, and now with Republicans pushing for stricter voter identification rules, the danger of moving further backwards is very real.

IAM President Tom Buffenbarger, who was recently named to the AFL-CIO Labor Commission on Racial and Economic Justice, is taking an active role in fighting these injustices.

“The attacks on the Voting Rights Act are an affront to what the United States should be in the 21st Century,” said Buffenbarger. “Every American must be encouraged to exercise their voting rights, without intimidation.”

“This week it is important for us to remember the reasons for the Voting Rights Act 50 years ago,” said IAM General Vice President Diane Babineaux. “We still have much to do to overcome widespread suppression of minority voting.”