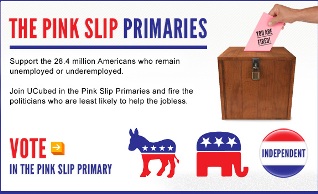 To refocus attention on the jobs crisis, UCubed is holding its own presidential primary – for jobless households – called the ‘Pink Slip Primary.’

Starting on August 1, at 7:00 a.m., the jobless of all political persuasions will be able to see what candidates running for president have said about jobs, what their campaign appeals are, and what they’ve done to put Americans back to work. Voters will then be able to vote for the candidate of their choice in the party of their choosing.

“In 2012, more than 40 million jobless voters will be forced to choose between two major-party candidates, candidates chosen by a few hundred thousand party activists who attended caucuses in Iowa or voted in the New Hampshire primary, candidates who never had to confront the harsh reality of being unemployed or underemployed for the past two, three or even four years. And that’s just not right,” said UCubed Executive Director Rick Sloan. “So, we are hosting the ‘Pink Slip Primary’ at UCubed. We want the jobless to vote for – or against – the presidential candidate who would lead this Nation.”

UCubed will announce the monthly and cumulative totals for the “Pink Slip Primary” on the last day of each month.