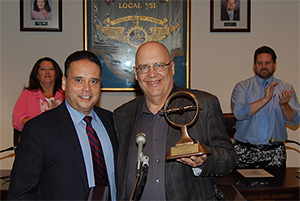 In an effort to give working people a voice in his hometown, U.S. Navy veteran and IAM District 751 Legislative and Political Director Larry Brown decided to take matters into his own hands by running and winning a seat on to the Auburn, WA City Council.

“Larry has been leading the political efforts at District 751 for years and is highly respected in the state of Washington as a leader and advocate for IAM members,” said Western Territory General Vice President Gary Allen. “I have no doubt that brother Brown will continue to do great things for working families in this new endeavor.”

“In Washington state, we have been all too disappointed by politicians who have been too weak-kneed to stand up for working families,” said Brown. “In an effort to find reliable allies in the halls of government we have been recruiting Machinists Union members to run for office. So when the opportunity opened up for me to run for Auburn City Council, I decided I should walk the talk.”

Brown’s campaign was greatly aided by his fellow union members, officers and activists from District 751. More than 1,300 Machinists members live in Auburn.

“I am proud that Larry stepped up as a candidate from labor and as an IAM member to make life better for all working people in his community,” said District 751 President and Directing Business Representative Jon Holden.

“The labor community turned out hundreds of volunteers and produced several thousand shifts of phone banks and canvassers,” said Brown. “With all of this help I was able to win my election with over 63 percent of the vote.”

“Auburn, like most communities has homelessness, crime and addiction problems. My campaign theme stated that the best social program is a good job,” said Brown. “I explained to the voters that Auburn doesn’t have any problems that can’t be solved or at least improved with enough good jobs. In order to create these jobs, we must invest in workforce training and transportation infrastructure.”

Brown joined the IAM in 1983 as an inspector at Boeing, after serving in the U.S. Navy from 1973-1977. He joined the District 751 staff in 1997 and has served as a Business Representative and in his current position as Political Director. Brown helped establish the Aerospace Joint Apprenticeship Committee and has served on the Board of Trustees for Green River College from 1998-2011 and the State Board for Community and Technical Colleges from 2011-present, where he currently serves as chair.