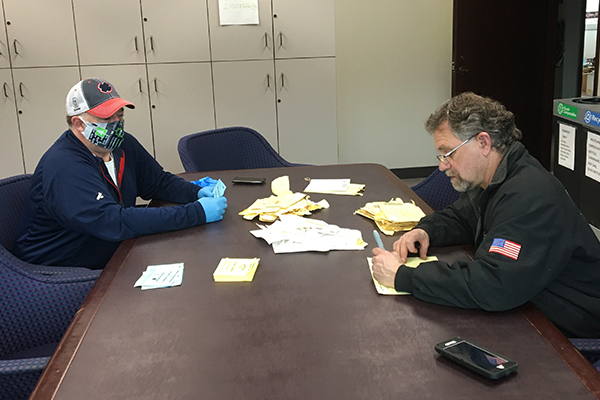 IAM District 751 members working at Hytek Finishes in Kent, WA continued to see the value of union membership as they ratified a new three-year contract when mail-in ballots were counted on April 24.

Workers at this tier one aerospace supplier had identified wages as the top issue for this round of bargaining. Negotiators focused on this and other issues of importance identified by members through surveys and meetings earlier in the year.

The new agreement provided 3 percent general wage increases for all members each of the three years of the contract. Not only were the GWIs a higher percentage than the previous contract, the new contract separated raises members receive after gaining additional skills and certifications from the GWI. Members can still gain additional increases for obtaining new skills and certifications; however, skill point pay increases no longer diminish the overall GWI percentage pool for members.

“People were happy with the wage increases – especially given the current climate,” said Union Steward Smith “Smitty” Larson, who also served on the bargaining committee. “In addition, the contract secured better insurance starting in September when Transdigm takes over full ownership from Esterline. Previously, there was no cap on increases to medical premiums. The new contract provides a weighted average medical premium increase cap of no more than 10 percent and a plan with better coverage.”

The contract also delivered improvements in other areas including paid time off, incorporating the state’s paid parental leave, and paid family and medical leave. The contract provided opportunities for cross training to gain new skills, and protection for full time employees from being laid-off as a result of Hytek using part-time employees.

“Overall people were satisfied with the contract,” Smitty added. “It got rid of company items that many people didn’t understand or like and is more straight forward with higher wage increases for all members each year.”

Early in the bargaining process, Hytek violated labor law by bargaining directly with the workers, sending them a letter in an attempt to undermine our union’s negotiating power and embarrass the union by noting that our proposal included a stronger union security provision that all workers must pay their fair share of union dues or an equal agency fee. This is an issue the IAM never shies away from because strength at the table comes from solidarity of the membership. At the same time, District 751 let workers at Hytek know their company had only proposed 1 percent wage increases and that our union was pushing for more, which it achieved with the 3 percent each year.

The new contract also provides union representatives better access to the shop floor so there will be increased union visibility. This is especially important to ensure all safety procedures during the COVID crisis are being followed.

“Congratulations to the entire bargaining committee and all that had a hand in the fight to secure a contract worthy of recommendation to our members,” said IAM Western Territory General Vice President Gary R. Allen. “It’s these kind of fights that show that the IAM never gives up and always fights for our members despite the tactics our opponents chose to implement.”

Currently, Hytek has remained open as an essential business and implemented additional safety procedures. Those who have underlying health issues or high risk dependents at home have the option to remain home and either use PTO or have excused LWOP.

Bargaining came at a tough time for the aerospace industry, with the 737 MAX having been grounded for more than a year and the global pandemic that has crippled airlines. Union negotiators—Business Representatives Pat Bertucci, Chief of Staff Richard Jackson, Union Attorney Spencer Thal and Union Steward Smith “Smitty” Larson worked hard to deliver a contract members could approve to build a stronger future for all going forward.