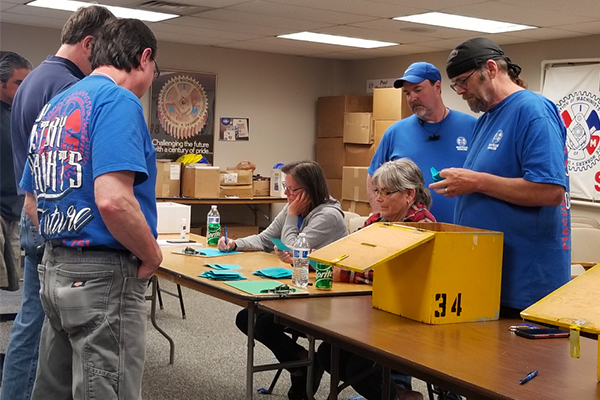 District 751 members working at Triumph Composites Systems in Spokane, WA ratified a three-year agreement that brought improvements in several areas. The contract demonstrated the importance of collective bargaining and membership rights even during tough economic times.

Bargaining during a global pandemic with layoffs at the facility was challenging, but after members identified their top issues, the union was able to make gains in several areas. The new contract provides two $1,000 signing bonuses, a 2 percent wage increase, elimination of a two-tier wage system, pension increases, yearly contributions to the Machinists Retirement Plan and other contract improvements.

Union negotiators were able to beat back a dramatic cost shift in health care the company was proposing and maintain the current plan for the life of the agreement with the annual premium increase now capped at 10 percent (previously 8 percent).

In addition, during effects bargaining, the union secured severance for laid-off members of 160 hours pay and one month of medical leave. Previously, there was no severance or medical after layoff.

The path to a new contract at Triumph demonstrated the importance of bargaining rights. Earlier in the year, with the 737 MAX grounding approaching one-year, Triumph approached the union to ask about a possible one-year extension – no improvements, no takeaways, simply extending the current agreement for one year. At that time, formal bargaining was scheduled to begin in April with the contract expiring midnight May 11. District 751 President Jon Holden and Business Representative Steve Warren talked with stewards and scheduled membership meetings on March 12 to discuss the situation and agree on a path forward to communicate to Triumph.

“We discussed transparently what was at stake with the members, outlined possible scenarios including the current bargaining timeline scheduled to begin in a month and came to a consensus to move forward with traditional bargaining. When you open a contract at other than expiration or extend an agreement, you forego the ability to discuss issues members identified as priorities and cannot make proposals based on those priorities,” said Holden. “Had we given up our right to bring forward our issues, we would have gotten nothing. The moral here is that maintaining the right to bargain doesn’t guarantee what you will get, but it gives you the right to determine your priorities and make proposals based on the membership’s priorities. Having the ability to bargain gives you a chance to make those improvements; and that is what happened here.”

“Congratulations to the bargaining committee and 751 leadership. This is an outstanding example of what the IAM stands for, above all putting the interest of the members first,” said Western Territory General Vice President Gary R. Allen. “The way this group held the line amid the virus and the company’s meager first offer, to secure a better deal is simply remarkable.”

Just days after meeting with the members in March, the world changed because of COVID-19. Boeing shut down for a month and Triumph scheduled layoffs for April 24 and April 30 (with no severance in the contract or offered to those suddenly facing layoff).

“These are tough times, and there was a lot to consider. Negotiating via videoconferencing instead of face-to-face was different,” said Steward Jerry Purser, who also served on the bargaining committee. “Members are pleased with the results and glad we entered bargaining rather than taking a one-year extension. A lot of things played into the situation, but our members remained united.”

“We made the right decision, entered bargaining and secured important things for our members in the toughest times we have seen since 9-11. Our members at Triumph are better off with the new contract and we secured severance provisions for those impacted by layoff,” Holden added.