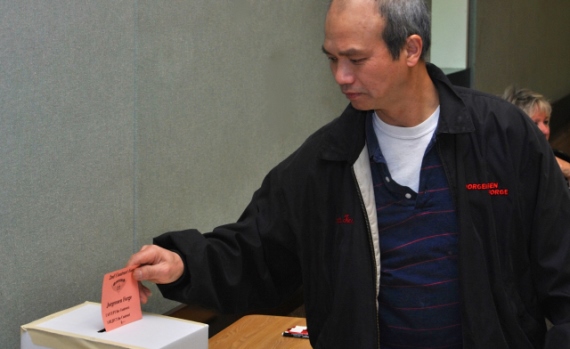 Machinists Union members who work at Jorgensen Forge Corp. (JFC) in Tukwila, WA will get their first pay raises in seven years after ratifying a new collective bargaining agreement.

The workers approved the three-year contract with a 94 percent yes vote. They had rejected the company’s first contract offer on April 9, 2015.

“Our members at JFC stayed united in solidarity and won themselves a better contract,” said Joe Crockett, a business representative for IAM District 751.

Under the deal approved, all Machinists at Jorgensen Forge will get 3 percent pay increases in May 2015.

In addition, the union’s negotiating team expects that many of the workers will see additional pay increases as they work with the company to establish a universal pay scale for all workers.

That will address a major issue for the workers, Crockett said. Before there was a union contract, pay rates at Jorgensen Forge were somewhat arbitrary, and in a number of cases, experienced workers were paid less than the newly hired people they were assigned to train.

Along with that, the deal provides workers:

The union’s negotiating team had recommended that the Machinists at Jorgensen Forge accept the contract, which had bigger pay increases and improvements in paid leave compared to the deal they’d rejected April 9.

There are close to 75 Machinists Union members at Jorgensen Forge, specialists who forge everything from propeller shafts used in ships and submarines to parts used in the aerospace, maritime and drilling industries. Their products are created from stainless steel, aluminum, titanium and other metals.

“I’m really proud of our brothers and sisters at JFC,” said IAM District 751 President Jon Holden. “This was their first experience with union contract negotiations, but they worked together in solidarity and the result was a better contract, and the best economic gains these workers have seen in nearly a decade.”