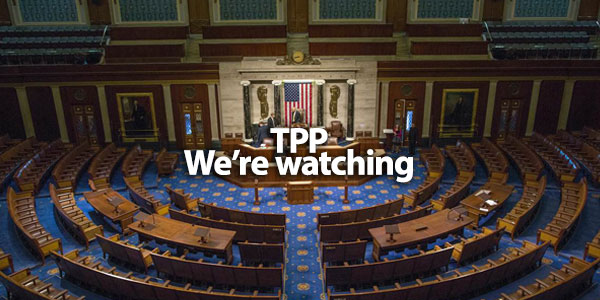 It’s known as the lame-duck session, the time between the November elections and January’s inauguration when members of Congress feel the least accountable to their constituents.

This time around, the two-month period is shaping up to be an all-out brawl over the corporate coup known as the Trans-Pacific Partnership, or TPP. Supporters of the job-killing deal are mobilizing now to hold a lame-duck vote on TPP.

They might have the money, but we have the people power.

Tell your members of Congress to stand strong against TPP, which will pit American workers against workers in countries like Vietnam making less than 65 cents an hour.

Since Congress narrowly passed “Fast Track” authority for the 12-nation deal last summer, the full text of the deal has been released—and it’s even worse than we thought.

The International Trade Commission, which usually overestimates the benefits of such deals, put out a report estimating worsening trade balances in 16 of 25 U.S. economic sectors, including manufacturing, automotive and chemicals. The overall U.S. trade deficit would balloon by an estimated $21.7 billion by 2032, the report says.

To make matters worse, a key prevision of TPP would grant new rights to thousands of foreign corporations to sue the U.S. government before a panel of three corporate lawyers, putting American taxpayers on the hook for unlimited sums of expected future profits.

The bottom line: TPP will mean more jobs being sent overseas and lower wages at home.

Now is the time to buckle down: Tell your U.S. Representative and Senators to VOTE NO on any lame-duck TPP vote.