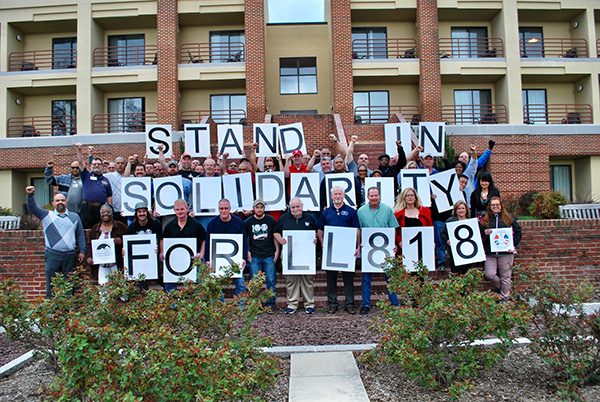 At issue is Tecnocap’s refusal to bargain in good faith as required by law with the IAM as the collective bargaining representative, by making unilateral changes to the terms, and conditions of employment.

“Tecnocap refused to present the negotiating committee with written proposals that differentiated with the existing collective bargaining agreement,” said IAM District 54 President and Directing Business Representative T. Dean Wright Jr. “Our team repeatedly made good faith efforts to negotiate a fair contract for our members, which were answered by the company’s refusal to negotiate. As a result, the IAM has filed an unfair labor practice (ULP) charge with National Labor Relations Board.”

“These members deserve better than Tecnocap’s refusal to bargain with them,” said Eastern Territory General Vice President Jimmy Conigliaro Sr. “We urge Tecnocap to sit down at the table and bargain in good faith to reach a fair and equitable agreement. Until that happens, our members of Local 818 will have the unwavering support of the Eastern Territory and the entire IAM.”

Picket lines went up just after midnight on Monday, April 9, 2018. The IAM Negotiating Committee and the company met unsuccessfully last week, in which Tecnocap continued their refusal to bargain in good faith.