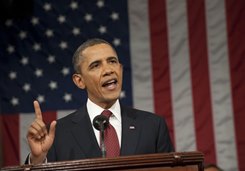 Working Americans will be listening closely as President Obama delivers his State of the Union address Tuesday evening at 9 p.m. ET.

They are looking for the President to outline a concrete plan to raise stagnating wages, defend their right to collectively bargain, protect U.S. jobs from reckless trade deals, and more. The past year has seen falling unemployment and a resurgence on Wall Street, but many working Americans remain left out of the so-called economic recovery.

“The President should seize this opportunity,” said AFL-CIO President Richard Trumka. “He’s talked a lot about the economy, but families don’t need to hear more about income inequality – they need more income. Working people want to hear not only what he thinks about raising wages, but what he’ll do about it.”

In the weeks leading up to the speech, Obama signed a presidential memorandum extending family leave for federal employees – and asked Congress to provide funding to help states and cities develop their own paid family leave laws. He’s also expected to further outline a new initiative to provide free community college for all Americans.

Follow the President’s speech live by downloading and playing the AFL-CIO’s State of the Union Bingo game. Join the conversation on social media by using the hashtag #WinSOTU.