What We’re Hearing at the Democratic National Convention 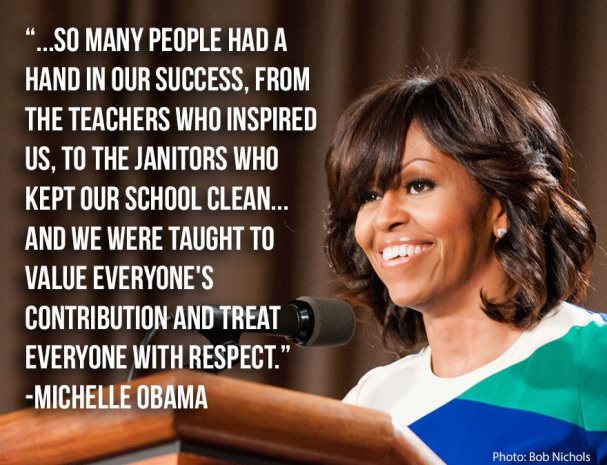 Many presidential elections have been called the most important of our lives—this year that sentiment may not be hyperbole. As Bernie Sanders would say, this election is “YUGE!”

If you’re like many working Americans, you want an economy that lifts up all of us, public schools that give every child the opportunity to succeed, enough money in the bank to retire comfortably and security from threats both at home and abroad. But this election isn’t just about policy, it’s about how we see ourselves as a country, whether we will unite instead of divide, and how resolved we are to stick to the values that made us great.

So, Hillary Clinton or Donald Trump? We’ll be hearing a lot of bluster from both sides until Americans head to the polls on November 8. It’s our job as informed voters to make sense of it all, then vote! If you’re not registered to vote, sign up here.

This week in Philadelphia, the Democrats are making their case for Hillary Clinton and her running mate, Virginia Sen. Tim Kaine. Here’s just some of what was said on the first day of the Democratic National Convention:

“As my daughters prepare to set out into the world, I want a leader who is worthy of… my girls’ promise and all our kids’ promise, a leader who will be guided every day by the love and hope and impossibly big dreams that we all have for our children.”

“You see, Hillary understands that the president is about one thing and one thing only, it’s about leaving something better for our kids. That’s how we’ve always moved this country forward, by all of us coming together on behalf of our children, folks who volunteer to coach that team, to teach that Sunday school class, because they know it takes a village.”

“Together, my friends, we have begun a political revolution to transform America and that revolution – our revolution – continues. Election days come and go. But the struggle of the people to create a government which represents all of us and not just the 1 percent – a government based on the principles of economic, social, racial and environmental justice – that struggle continues.”

“‘Divide and Conquer’ is an old story in America. Dr. Martin Luther King knew it. After his march from Selma to Montgomery, he spoke of how segregation was created to keep people divided. Instead of higher wages for workers, Dr. King described how poor whites in the South were fed Jim Crow, which told a poor white worker that, ‘No matter how bad off he was, at least he was a white man, better than the black man.’ Racial hatred was part of keeping the powerful on top.”

“In this election, [Hillary Clinton] is fighting to rewrite the economic rules for all of us. She has a bold plan to invest in manufacturing, infrastructure and jobs. She opposes the job-killing Trans-Pacific Partnership. She will protect workplace rights, stand up to Wall Street and finally, finally secure equal pay for equal work.”

“Donald Trump repeatedly has outsourced America’s jobs to line his own pockets. He rooted for the financial and housing collapse. And he actually said our wages are ‘too high.’ Donald Trump isn’t the solution to America’s problems. He is the problem.”

“I know we will show each other, and the world, who we really are in November — when we choose genuine strength and thoughtful leadership — over fear and division. Donald Trump doesn’t see me, he doesn’t hear me, and he definitely doesn’t speak for me.”

Hillary Clinton is expected to formally accept the Democratic nomination for president in a speech on Thursday night. The IAM endorsed Clinton in August 2015.