Why Raising the Minimum Wage Makes Sense for Pretty Much Everyone 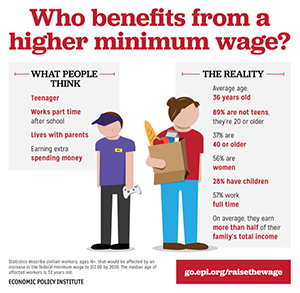 The pervasive stereotype that a minimum wage increase would only help teenagers working part-time jobs is simply not true. A new report from the Economic Policy Institute shows us why.

Raising the federal minimum wage to $12 per hour by 2020 would lift wages for one-quarter of American workers, the report finds. More workers age 55 or older would see wage hikes than teenagers and the average age of an affected worker is 36 years old.

Over 17 million children – more than one-fifth of all children in the United States – stand to benefit from an increase in their parents’ pay.

“The average minimum wage worker is not a teenager working after school to earn some extra spending cash. The reality is that these are older workers who often have families to support,” says EPI economic analyst David Cooper. “Raising the minimum wage, eliminating the lower minimum wage for tipped workers, and indexing the wage floor to median wages will improve the wellbeing of millions of workers and their families and will prevent low-wage workers from getting left behind again going forward.”

The Raise the Wage Act, introduced by Sen. Patty Murray (D-WA) and Rep. Bobby Scott (D-VA), would raise the federal minimum wage in five steps to $12 per hour by 2020. Beginning the following year, the minimum wage would be indexed to the median wage, so that yearly adjustments would be established.