Why Women’s Pay Affects Us All 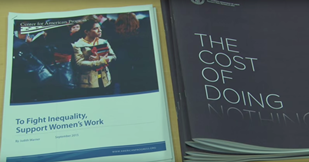 “It’s widely acknowledged around the world that women’s employment is key not only to the nation’s economic growth, but it is also a powerful counterforce to income inequality,” said Carmel Martin of the Center for American Progress (CAP).

In a recent publication the CAP reports that the United States is the only industrialized nation that does not guarantee paid time off for working mothers to care for a new child.

The Cost of Doing Nothing, prepared by the U.S. Department of Labor, focuses on the importance of addressing the need for paid family leave in our country.

“While we fail to take action, who pays the price?” said U.S. Secretary of Labor Tom Perez. “The answer is clear. We all pay a very steep price: as workers, as families, as employers and as a nation.”