Wichita District 70 Rolls a ‘300’ for Guide Dogs of America 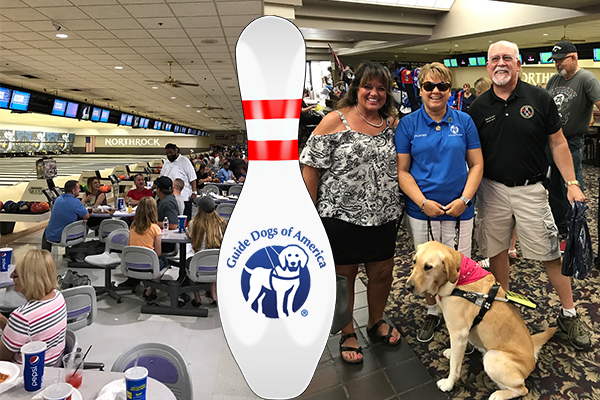 For the 5th year in a row, IAM District 70 brought home a perfect score with their Guide Dogs of America (GDA) “Doggie Bowl” bowling fundraiser, raising more than $13,500.

With nearly twice the participants of 2016’s event, 147 bowlers took part to double the money raised for GDA this year. The school relies solely on donations, so rolling strikes at events like this one make sure it stays viable to provides guide dogs to blind and visually impaired people across the U.S. and Canada.

“You call the Machinists and we will be there, especially for Guide Dogs of America,” said Southern Territory General Vice President Mark Blondin. “This organization, created by a Machinist, has literally changed the lives for men and women who need not a hand out, but a hand up. And it’s not just for labor.

“We may call each other brothers and sisters in our own house, but that feeling extends to our friends and neighbors in the community. So when there’s an organization that can help people in all four corners of this great country and Canada, you had better believe the IAM will lead the way.”

Lane sponsors ranged from a congressional candidate to a slew of Wichita aerospace leaders, as well as members from various IAM Locals stretching across the Sunflower State and beyond.  Even members of the local community joined in the fun to raise money for the pups.

This year, the evening included a live auction and 36 lane sponsorships, both huge hits. District 70 Business Representative Juice Bruner served as the master of ceremonies and auctioneer. The night was a resounding success all around, according to those in attendance. That’s due in large part to the hard work and dedication of the volunteers who give their time for this cause, year after year.

“There’s never enough thanks for everyone who donated, sponsored and volunteered to make this a huge success,” said IAM Aerospace Coordinator Tony Blevins. “I also want to send additional thanks to the District Lodge 70 staff and members who volunteered their time to work the event. The wonderful pictures speak for themselves. It was an evening no one will soon forget.”