‘We Will Win’: Oklahoma Local 850 Members at Alutiiq Standing Strong 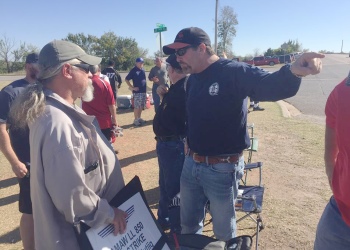 Twelve weeks. That’s how long more than 200 brave men and women who work for Alutiiq, LLC have been on strike.

They’re fighting for their livelihoods. Their employer wants to slash their health care and end pension contributions.

The Local 250 members are civil engineers who maintain infrastructure at Tinker AFB in Oklahoma City.

“This is a strong strike, and I’m proud of our membership for standing together,” Southern Territory General Vice President Mark Blondin said during a recent group meeting.

The IAM and Alutiiq, an Alaska Native Corporation that took over a maintenance contract at Tinker AFB in Oklahoma City on August 1, have agreed to resume negotiations with a federal mediator beginning October 27.

“Support continues to flow in from around the IAM, and the Southern Territory is working to bring this strike to a successful end. I know we can—and we will—win this strike,” said Blondin.

Recently, 17 members of Wichita Falls, TX Local 2771 brought five pick-up trucks worth of food for strikers and their families. Fort Worth, TX Local 776B Vice President Mark Miller also stopped by to host a cookout for Local 250 families.

Then, sign a petition to Alutiiq’s board demanding the company restore their employees’ negotiated benefits and end the strike.