After saying in his re-election bid that he wouldn’t push for so-called right-to-work legislation, Wisconsin Gov. Scott Walker (R) now says he will sign a bill being railroaded through the state’s General Assembly to make Wisconsin the country’s 25th right-to-work state.

Labor activists will protest at the state Capitol in Madison on February 24 and 25 while the state senate holds hearings and debates the measure. The bill could come to a full floor vote as early as this week.

Add your name to the petition to stop right to work. 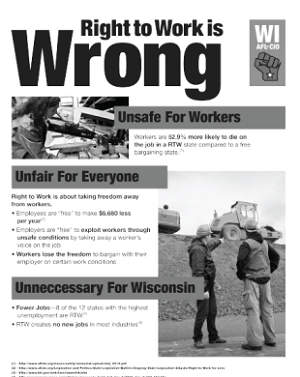 Watch “The truth About Right-to-Work Laws” on the Machinists News Network.

Living in a “right-to-work state” does not mean you have the right to work. Or that you don’t have to join a union. No one is required to join a union under federal labor law.

But the same law mandates that unions represent every worker in a workplace where the majority of workers have voted for union representation. Right-to-work laws take advantage of this obligation by making it illegal for companies and unions to negotiate agreements that say workers will pay for at least their fair share of the cost of collective bargaining.

The editorial board of the Milwaukee Journal Sentinel, the largest newspaper in the state, disagrees: “But will Wisconsin be better off as a right-to-work state? There is no compelling evidence that it will be and plenty of evidence that the working class may, in the end, suffer as a result of what the GOP is contemplating.”

Click here for a flier on why right to work is wrong for Wisconsin’s economy.

Wisconsin Gov. Walker, touring the country in anticipation of a probable run for president in 2016, already stripped collective bargaining rights for most of the state’s public employees when he signed Act 10 amidst mass protests in 2011.

“This right-to-work sham is about much more than unions,” said AFL-CIO President Richard Trumka. “It is simply the next step in the billionaire right wing’s attempt to strip our freedoms to bargain with our employers as we see fit, ensure safe work places, and raise wages across the country.”

Do you live in Wisconsin? Attend a rally at noon tomorrow, Wednesday, February 25, on the State Street side of the Capitol in Madison. Visit the Wisconsin AFL-CIO website for more information and updates.

Add your name to the petition to stop right to work.