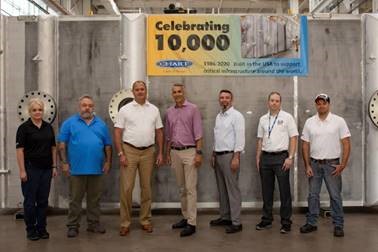 Members of IAM Local 2191 working at Chart energy surpassed a monumental landmark recently by producing 10,000 heat exchanger cores since the division was purchased from Trane. The employees who produce these huge aluminium cores, along with maintenance and tool and die makers, are all represented by the IAM.

“I couldn’t be more proud of our members and what they do at Chart and at all of our other shops in the district,” said IAM District 66 Directing Business Representative Neil Kamrowski. “Congratulations to Chart and our members in Local Lodge 2191 for achieving this great milestone.”

“Congratulations to the members of IAM Local 2191 at Chart Energy on such a remarkable accomplishment,” said IAM Midwest Territory General Vice President Steve Galloway. “As a union, we are proud to know that heat exchanger cores shipped around the world are produced right here in La Crosse, Wisconsin – by proud Machinists members. I’m looking forward to celebrating another 10,000 heat exchanger cores.”

Members at the LaCrosse, WI facility meticulously assemble the cores one layer at a time. Machinists Union members handle everything from making the fins from sheets of aluminium to assembling the core to assembling and welding the headers, to installing the headers and testing the core for leaks. The group was responsible for producing the core of the world’s largest and second largest brazing furnaces.