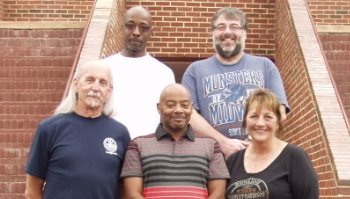 The IAM Local 66 Negotiating Committee and staff from District 10, who represent members at Badger Meter, Inc., in Milwaukee, completed the Negotiations Preparation for Bargaining Committees program at the Winpisinger Center.

Recognizing that it is likely to be a difficult round of negotiations, the committee strategized to change its bargaining approach and map a new direction for relations with the company. Increasing solidarity in the bargaining unit and including better contract language in the new agreement were key considerations during the program.

“The week at the Winpisinger Center gave us the opportunity to assemble and develop a detailed plan to secure the best contract possible,” said District 10 Business Representative Di Ann Fechter. “The Committee worked hard, and not only do they leave the Center better prepared to advance the needs of Badger Meter members, but also as a unified new Committee ready to tackle negotiations with confidence and determination.”