Without the IAM, ULA Couldn’t Reach the Sky 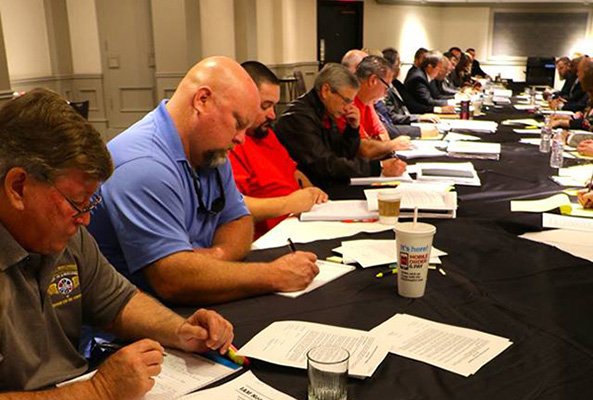 United Launch Alliance started negotiations by telling the IAM that although there was work to be done, they were very proud of the workers who have made this company the safest in the aerospace industry. The numbers speak for themselves – 100% successful launches of the Atlas 5 rocket since its induction.

Fast forward weeks later as we move into economic negotiations and the tone is quite different. Today, ULA gave the IAM their first economic pass which was completely unacceptable to the negotiating team and promises to stir the members on the shop floor into action.

“We are disgusted by what ULA is offering our Members. Takeaways are a non-starter. All we are asking for is a fair contract with affordable benefits and a chance for our members to retire with dignity after giving a good portion of their lives to this job,” said IAM Southern Territory General Vice President Mark A. Blondin. “I agree with the Machinists working at ULA this is an unacceptable contract offer at this point. The IAMAW in the Southern Territory, and certainly throughout our nation, will support our ULA Machinists and do whatever it takes to ensure our members get an agreement that reflects their incredible talents and contributions.”

“Our members deserve a great contract for the work that they perform, and we will stand by their side in this fight,” said IAM Western Territory General Vice President Gary Allen.

“If they are serious about getting an agreement, they are going to have to make some movement in paying these workers what they are worth and allowing them a prosperous quality of life, much like the way in which our members have helped to make ULA prosperous,” said Chief of Staff and Aerospace Coordinator Jody Bennett.

“It’s almost as if ULA wants to start over; to erase what the IAM has spent decades negotiating in good benefits and wages for our Members,” said Aerospace Coordinator Mark Johnson. “This is not a first contract. These workers have been proving themselves, year after year, and for that, they deserve a fair contract. It’s rare that we find ourselves in a situation where we are still working on non-economics while the financial aspects of the contract are crossing the table at the same time. This is not the way the IAM operates.”

Since April 12, 2018 when the negotiation team landed in California, the work has been ongoing. There are still a few outstanding items that have committee members shaking their heads in disbelief.

Subcontracting, which is basically a form of outsourcing, is still rearing its ugly head into each pass of the company’s proposals. Travel issues when Machinist members have to move from one ULA facility to another for a period of time is another area in which ULA doesn’t want to offer a fair wage. Forcing overtime and mandatory training sparks fevered conversation among the IAM negotiating team each and every time it crosses the table. This is why the Union and ULA remain still very far apart on a last, best and final.

Western Territory Grand Lodge Representative Mike Goddard says in his more than 40 years as an IAM Member, he’s rarely experienced a bargaining table situation as unique as this one.

“It’s tough to look around the room and see so many hard-working, dedicated Machinist members who have given so many years to help make ULA the best there is in the marketplace,” says Goddard. “We want to help the company remain at the top of their game and be competitive, but they need to recognize it’s the workers on the ground who make sure ULA can continue to reach for the skies.”

Support your Brothers and Sisters by following these negotiations on our website at www.iamulanow.com.