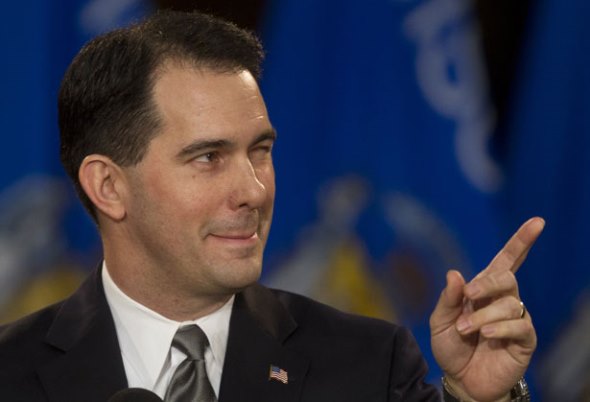 Working people in Wisconsin were having a bad week already.

Their own state representatives, paid for and bought out by corporate interests, are ramming through a so-called “right-to-work” law for no other reason than to silence workers’ voices and eviscerate unions. Anti-worker Gov. Scott Walker said he expects to sign the legislation into law this week.

But then Walker, trotting around the country boasting his bona fides as he gears up for a 2016 presidential campaign, stopped by the Conservative Political Action Conference (CPAC), the annual circus-like gathering for far-right activists and fawning young conservative operatives-to-be that takes place in suburban Washington, DC.

Walker gave a 15-minute stump speech to the crowd before being asked a question from a board member of the American Conservative Union, the political organization that hosts CPAC.

“Should you become commander-in-chief, how would you deal with threats such as ISIS?”

ISIS is the terrorist group in Iraq and Syria that is beheading innocent people, massacring prisoners and exterminating entire communities.

Walker responded not with a plan, but with how his battles against organized labor in the Badger State have prepared him to take on…you guessed it, ISIS.

“We need to have someone who leads and ultimately will send a message that not only will we protect American soil, but…freedom-loving people anywhere else in the world. We need that confidence,” said Walker. “If I can take on a hundred thousand protesters, I can do the same across the world.”

Walker later told a CNN reporter that he didn’t regret comparing union members to ISIS, saying that both were “difficult situations.”

Walker was the target of massive, but peaceful, protests in 2011 when he signed into law Act 10, which stripped collective bargaining rights from almost all of the state’s public employees. IAM members and other union members have been picketing the state capitol in Madison again as the state legislature is poised to pass right-to-work legislation.

“Governor Walker’s outrageous comments are a blasphemous insult to not just union members exercising their right to peacefully protest, but to all Americans,” said IAM International President Tom Buffenbarger. “These are working men and women, his constituents, who are standing up for themselves and pushing back against policies that hurt them, their families and their communities. They exemplify what’s great about America, and they deserve a governor who respects them, not one who trashes their name to score political points. Governor Walker, you should know you made a mistake; the working people of Wisconsin, and everywhere, deserve an apology.”

“Noteworthy, Walker argued that when Reagan fired the PATCO air-traffic controllers over their illegal strike, he was sending a message of toughness to Democrats and unions at home as well as our Soviet enemies abroad. Similarly, Walker believes his stance against unions in Wisconsin would be a signal of toughness to Islamic jihadists and Russia’s Vladimir Putin.”

Add your name to a growing petition to stop right to work.

If you live in Wisconsin, send an email to your state representatives.