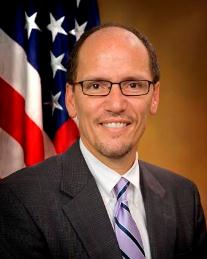 Washington, D.C., March 18, 2013 – The International Association of Machinists and Aerospace Workers (IAM) is eager to work with President Obama’s nominee for Labor Secretary, Thomas E. Perez, and urges the Senate to confirm Perez as quickly as possible.

“As Assistant Attorney General for the Justice Department’s Civil Rights Division, Tom Perez has already proven himself to be a formidable champion of both civil and labor rights,” said IAM President Tom Buffenbarger. “We’re confident Mr. Perez will continue the legacy of outgoing Labor Secretary Hilda Solis, who fought so hard to protect workers’ rights on and off the job.”

A first-generation Dominican American and Harvard-educated lawyer, Perez also served as Maryland’s labor secretary and was the first Latino ever elected to the Montgomery County Council.

“He [Perez] understands that our economy works best when the middle class and those working to get into the middle class have the security they need on the job, a democratic voice in the workplace, everybody playing by the same set of rules,” said President Obama at a news conference to announce Perez’s nomination. “Tom’s knowledge and experience will make him an outstanding Secretary of Labor.”