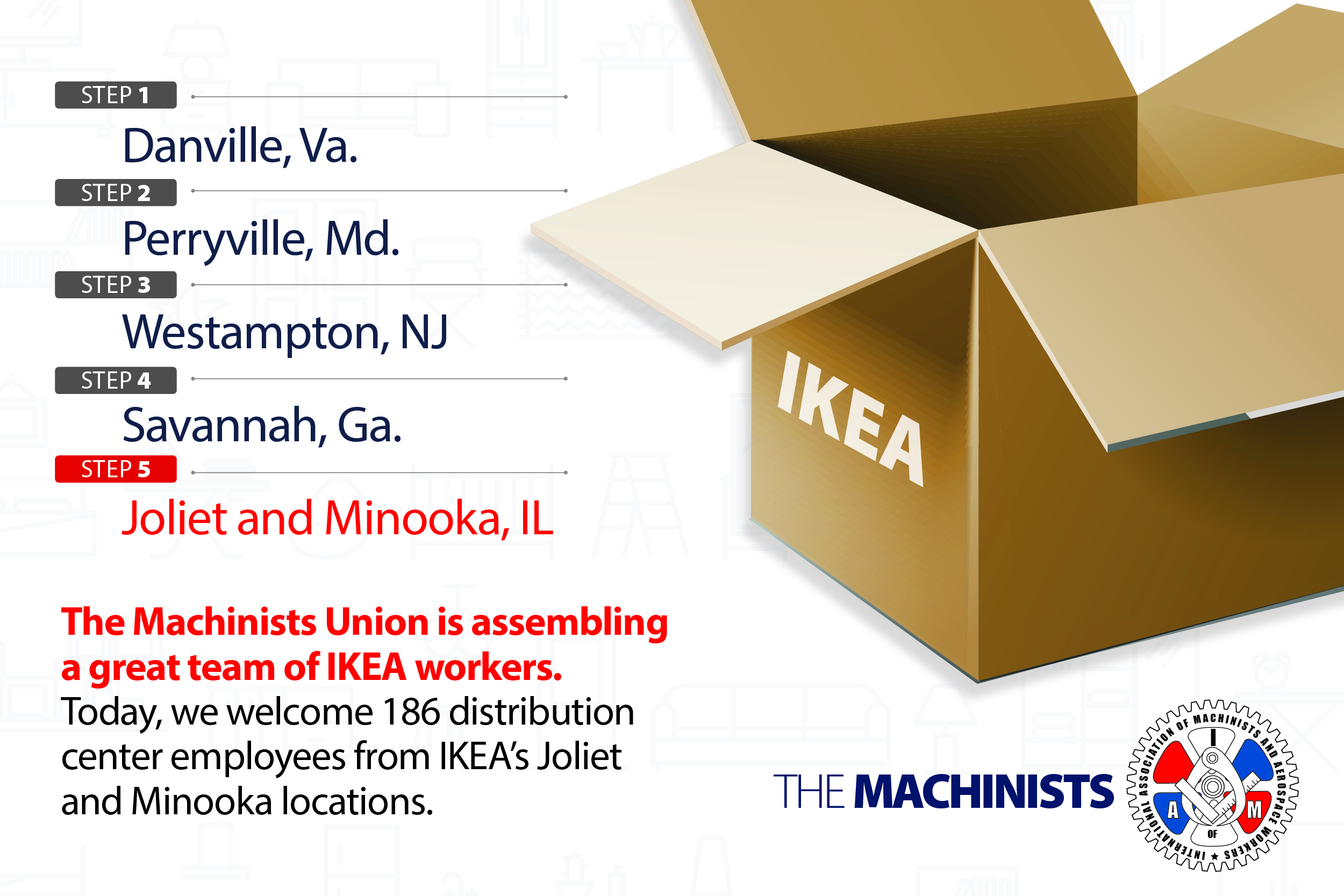 WASHINGTON, June 21, 2019 – A group of 186 distribution center workers at IKEA distribution centers in Joliet and Minooka, Ill. voted this Wednesday and Thursday to join the International Association of Machinists and Aerospace Workers (IAM). IKEA is in the process of transitioning work from Minooka to its new facility in Joliet.

“These hard-working men and women are proud to work at IKEA and do tremendous work for this company,” said IAM Organizer Dennis Mendenhall, who led the IAM’s campaign. “Yes, joining the IAM gives them the opportunity to negotiate on wages, benefits and work rules. But this campaign was mostly about fairness and a voice on the job, as well as ensuring that the profits they create also benefit their families and communities.”

The organizing win gives a boost to the IAM’s internationally backed campaign to unionize thousands more IKEA distribution and fulfilment center workers. The IAM has partnered with a global union federation, Building and Wood Workers’ International (BWI), to grow leverage in organizing and bargaining with Europe-based IKEA, the world’s largest furniture manufacturer.

The IAM also represents workers at IKEA facilities in Danville, Va., Perryville, Md., Westampton, N.J., and Savannah, Ga. IAM workers at IKEA recently wrote a support letter to Illinois IKEA workers saying the “strong IAM contracts we have negotiated are not just words on paper—it has given us respect and fair treatment on the job.”

In the wood, pulp and paper industries, the IAM also represents workers at Weyerhaeuser, West Rock and Georgia Pacific, among others. The IAM Wood, Pulp and Paper Council recently held a conference to strategize on how to grow power in the sector.

“By joining the Machinists Union, these men and women will be a part of the strength we continue to gain for IKEA workers,” said IAM International President Robert Martinez Jr. “This was a total team effort for the IAM. I want to thank lead organizer Dennis Mendenhall and the Organizing Department, the Midwest Territory, Local 701, District 8, the Woodworkers Department, and BWI for making this win possible.”

“On behalf of the IAM Midwest Territory, I would like to welcome the women and men of the IKEA distribution centers in Joliet and Minooka.” said IAM Midwest Territory General Vice President Steve Galloway. “Congratulations on taking the first step towards securing a better future for you, your families, and other workers across the U.S. who are still fighting for a union and a real voice at their place of work. This was a collective effort. Thank you to Lead Organizer Dennis Mendenhall and IAM Local 701 and IAM District 8 in Chicago for your relentless work and never giving up. And a huge thank you to the IAM Organizing Department, the IAM Woodworkers Department and BWI for your immeasurable support in this effort, as well.”

The IAM is among the largest industrial trade unions in North America and represents nearly 600,000 active and retired members in aerospace, transportation, manufacturing, shipbuilding, woodworking and other industries. Visit goIAM.org for more information.