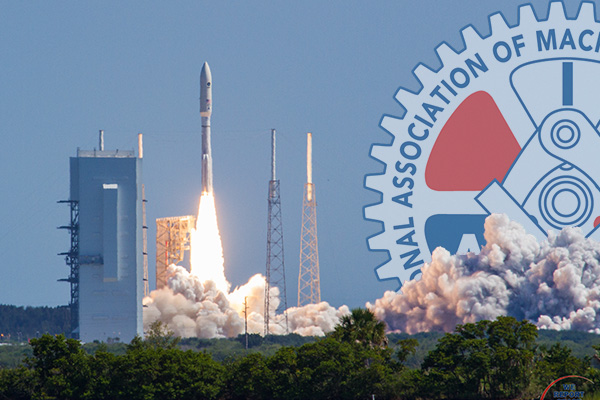 Nearly 600 Machinist Union Members at United Launch Alliance will soon vote on a new offer from the company. The negotiating committee is recommending this new agreement to the membership. Machinist members have been on strike against the company since Monday, May 7, 2018 at facilities in Decatur, AL, Vandenberg Air Force Base, CA, and Cape Canaveral, FL.

“We’re pleased that our members at United Launch Alliance will have an opportunity to vote on a tentative agreement,” said Machinists Union International President Robert Martinez Jr. “I am proud of our IAM members at Local 44 in Decatur, AL, Local 2786 at Vandenberg AFB and Local 610 at Cape Canaveral Air Force Station for working together in unity to address our members’ key issues. IAM members across North America wish them Godspeed as they vote on this agreement.”

“Although we are happy that the negotiating committee has been able to reach an agreement that they feel they can bring back and recommend to the membership, at the end of the day we are a Democratic union and it will be up to our brothers and sisters at the three ULA locations to decide what is best for themselves and their families,” said IAM’s Southern Territory General Vice President Mark A. Blondin. “Whatever the result, the Machinists Union is very proud of the men and women who took a stand for their labor family and for workers around the globe. It is a very brave person that sacrifices everything to gain the respect and dignity deserved after giving a lifetime of service on the shop floor.”

“Through our Brothers’ and Sisters’ strength, determination and unified action, the parties came together to work toward a new offer,” said IAM Western Territory General Vice President Gary Allen. “It is my hope that it meets the members’ needs.”

Members will vote on the new offer Saturday, May 19, 2018 from 12 to 2 p.m. Eastern at all three locations. For details on the tentative agreement, you can log onto www.iamulanow.com.