< Back to Picket Lines Go Up at Kennedy Space Center 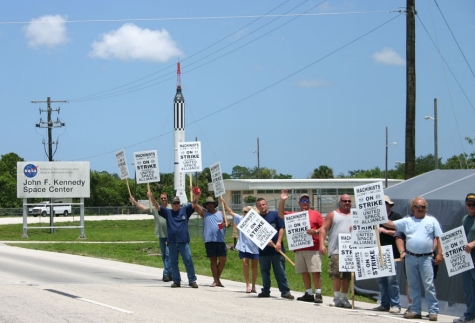 Members of Local 2061 and District 166 set up picket lines at
Kennedy Space Center early this morning.

June 14, 2007 – Members of Local Lodge 2061 and District 166 who perform Space Shuttle support duties for the United Space Alliance (USA) walked off the job today after USA management proposed a substandard contract offer. The USA is a joint venture formed by Lockheed Martin and the Boeing Company to provide launch services to NASA.

“The United Space Alliance refused to change the offer,” said Local 2061 President Lew Jamieson. “We did everything we could to come to an agreement. Enough is enough – we won’t accept a substandard contract.”

Local 2061 members voted to reject a contract offer by a 93% margin and authorize a strike on June 2.

At the end of a five-day cooling off period, a Federal Mediator brought both sides back together, but when the company offer remained unchanged, the negotiating committee quickly called the strike.

“The Space Shuttle is an important program, and there was no good reason for United Space Alliance to force a strike now,” said Aerospace Coordinator John Crowdis. “It’s unfortunate that it appears outside influences that should have remained neutral, have interfered in the arm’s length negotiations between the Machinists and United Space Alliance.”