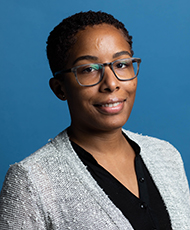 Ashley joined the IAM with over 10 years of experience in multimedia design and video production. Most recently, she served as a Senior Graphic Designer at the American Physical Society (APS) where her work catered to a diverse demographic of more than 55,000 members. Before working at APS, Ashley’s tenure at new media startup 20/20 Productions produced award-winning web series reaching viewers in over 145 countries. She has also worked as a freelancer with clients including the NAACP and Washington Ballet.

Ashley holds a bachelor’s degree in communications from Howard University in Washington, DC.