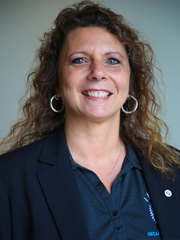 Bridget Fitzgerald was raised in a union home and grew up embracing those values. From supporting workers on picket lines with her parents to being an active member of UFCW Local 400 in high school, fighting for workers’ rights comes naturally. Bridget channeled her passion for equality and justice into a career when in 1997 she came to work at IAM Headquarters in the Women’s and Human Rights Department. In 2014 she joined the IAM staff and became a third-generation machinists, following her mother and grandfather. The following year she was appointed Special Rep, then transferred to the Organizing Department in 2017, where her primary focus has been growing membership in the federal sector.Fitzgerald graduated from the University of Maryland College Park with a Bachelor’s in Liberal Arts and earned a Master’s in Union Leadership and Administration from the University of Massachusetts Amherst in 2016.