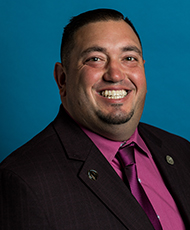 Chuck Herod joined the IAM’s staff as an apprentice organizer in January 2014 before serving as co-chair of the District 65 Organizing Committee in western New York. Herod was a trustee, steward and then chief steward at Local 2401 in West Valley, NY. He initiated into the IAM in December 2003 as a worker at the West Valley Demonstration Project. He was assigned as a Special Representative in September 2015 and progressed to a Grand Lodge Representative.

On May 1, 2022, Herod was appointed IAM Eastern Territory Chief of Staff.