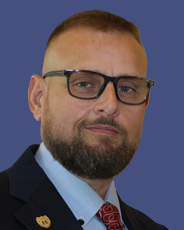 David Chartrand was sworn in as the Canadian General Vice President of the International Association of Machinists and Aerospace Workers on July 1, 2021. He is the first GVP from the province of Québec and speaks both English and French.

Chartrand has been involved in the labor movement for more than 30 years. He began as a member of IAM Local 712 in 1990 as a Sheet Metal worker and aircraft assemblyman at Bombardier Aerospace in Montréal, Québec

In 2006, after having served as Trustee and Vice President of District 11, Chartrand was elected as President and Directing Business Representative.

Chartrand was appointed to the IAM Canadian Territory Staff as a Special Representative on January 4, 2014 and became the Québec Coordinator for the IAM in July of the same year.

Chartrand and his wife, Marie Claude, have two children, Samuel and Chloe.