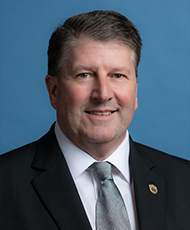 A 33-year IAM member, he initially joined the Industrial Union of Marine and Shipbuilding Workers of America (IUMSWA) as a shipbuilder at Bath Iron Works in Bath, ME in 1986. After the IUMSWA merged with the IAM in 1988, Sullivan served as a Shop Steward, Local Lodge Officer, and on many committees at IAM Local S6 before joining the District 4 staff as a Business Representative representing Region 1 in New England.