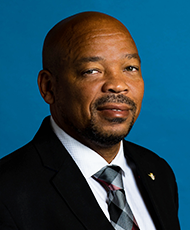 Edison Fraser initiated into IAM Local Lodge 846 in Baltimore, Maryland in 2002 as a Customer Service Agent for Southwest Airlines and held several Local Lodge positions from Shop Steward to President. From 2005 to 2012, Fraser worked as an organizer on several successful organizing campaigns for District Lodges 141 and 142.

Determined to further his education, Fraser took advantage of the educational benefits afforded to IAM members. Immediately after becoming a full-time representative, Fraser enrolled in the National Labor College and later attended Empire State College. A long-time goal was to graduate college before his son Orantez. Fraser is proud to say, “My union the IAM, made reaching my goal possible.”

A native of Kingston, Jamaica and a fighter for workers’ rights, Fraser holds an Associate Degree in General Studies, a Bachelor’s degree in Labor Studies from the National Labor College and a Master’s in Work and Labor Policy from Empire State College in New York.

On May 1, 2022, Fraser was appointed Chief of Staff for the Air Transport Territory