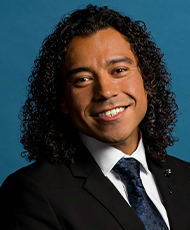 Elías Flamenco Rivera joined the IAM’s Communications Department in September 2022 as a Communications Representative. His responsibilities include providing support to union leadership, staff and members in their internal and external communications needs and to increase IAM’s outreach to Spanish-speaking members.

Prior to the IAM, he worked at the United Food and Commercial Workers International Union where he developed content and strategies to grow the union’s online influence and engagement among members by promoting key policy issues and organizing campaigns.

During his time at a public affairs agency in Washington, DC, Elías received PR News’ “Rising Stars 30 & Under Award” in 2019 as recognition for his consistent ability to deliver to his clients.

Elías’ experience also spans the non-profit and legislative arenas, which includes his work at Public Citizen as a Global Trade Watch’s Program Associate coordinating digital media strategy to increase public and congressional awareness of the impact of trade policies. In 2016, he completed a public policy fellowship with the Congressional Hispanic Caucus Institute (CHCI) and served at the Tom Lantos Human Rights Commission in the U.S. House Foreign Affairs Committee and for then U.S. Rep. Chris Van Hollen (D-MD).

Elías graduated from Towson University with a B.A. in international studies and a minor in anthropology.