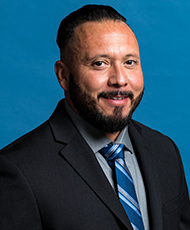 Gary E Allen initiated into AFSCME Local 624 in 2005 while employed with the City of Albuquerque, NM. In 2006 Gary ran for his first elected office as a Local Lodge Recording Secretary and subsequently served in every elected positions at his Local.

In 2011 Gary was appointed to the position of Representative for AFSCME Council 18 where he represented Public Sector workers employed by the City of Albuquerque, handling grievance as a shop steward and as part of the Grievance Resolution committee. Which provided him experience in preparing and handling Arbitrations.

For several years he has worked as a public sector employee representative, negotiating several major improvements for Albuquerque workers including unprecedented wage increases, job and benefit protections. He became a resilient voice in the New Mexico Labor movement after becoming involved in the State’s major Labor battles, including the fight to beat back right to work legislation three times and defending Labor from the anti-labor agenda of Governor Susana Martinez. Where he took a leadership role in mobilizing, equipping and organizing his Brothers and Sisters for the battles.

In 2012 when Albuquerque’s Mayor Richard Barry attempted to strip City workers of their collective bargaining rights, Gary led the charge and became the spokesperson for the members at City Council meetings. He continued to lead the fight at both the state and city level to thwart Mayor Barry’s anti-labor agenda and in 2017 helped navigate the successful campaign of Pro-Labor Mayoral candidate Tim Keller.

Gary has taken numerous classes as part of the AFSCME Union, including Organizing, Officer’s training, Train the trainer, negotiations and “AFSCME Strong training” specifically geared to building solidarity and power. He is currently pursuing a degree in Business Administration.

In September of 2018 GVP Allen hired Gary as an Associate Organizer and in January of 2019 hired him as the Communication Representative for the Western Territory.