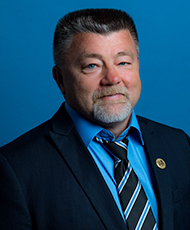 Edwards was appointed as a Special Representative to the Eastern Territory in August 2021.

In 1987, he started at Local S6 at Bath Iron works in Bath, ME as a tinsmith. Since 1990, Edwards held various positions at the local from Officer to General Steward until January 2013 when he became a District 4 Business Representative.