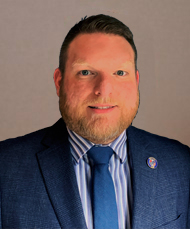 Jeffery Tobius was initiated into Local Lodge 2202 in Seattle in 2005 as an employee of Alaska Airlines, where he held various positions at his local lodge, which included Shop Steward, Recording Secretary, and served on several committees. In 2011, Tobius was appointed to serve as a General Chairperson for District Lodge 142, where he was successfully reelected for several terms. In 2019, Tobius was appointed as a Special Representative to the Air Transport Territory and elevated to Grand Lodge Representative shortly thereafter.

Tobius holds two bachelor’s Degrees, in English and Film/Video Theory, from Central Washington University and a Master’s Degree from the University of Washington in Creative Writing.